When Jack was 3, 6, 9, and 12 months we took him to get his picture made for a panel of his first year. I love it! It's so fun to see how much he changed over his 1st year. I want the same thing for Lillie and Elliott but can't afford/not willing to pay to go to a studio here in the city. Our friends Jon and Jen Zila in New Jersey came over about a month ago with their little girl to spend a day with us. She was telling us about enjoying photography and I asked if she would be willing to take some pictures of Lillie and Elliott for us so I could create my own panel for them. I showed her what Jack's looked like and she graciously agreed to do it for us.

So... yesterday we loaded up the 4-Runner and headed to Jersey. It was quite the experience for me. Here's how it worked. I had to reserve the church car a few weeks ago on the church calendar. My goal was to pick up the car around 9:oo a.m. in the morning. So at 8:30 I called the garage and gave them our slot number so the car would be waiting for me when I got there. I carried a diaper bag, another bag, my purse, and two bases for the carseats with me down to catch a cab and rode about 30 blocks north to the garage. I installed everything and drove back to our apartment and looked for a parking spot. Found one sort of close to our building and parked. Then I went up to our apartment and met Donna (my aunt visiting from TN), Jack, Lillie and Elliott. I carried Jacks car seat and Jack, Donna packed the twins in their carriers. We got to the car, got the twins in, Jack was hanging out in the front seat while I squeezed his seat into the back. If it had been an inch wider they would not have all fit! Then I made my way to New Jersey. It was my first time driving in the city and my first time behind the wheel in 4 months! It was so liberating to drive again. Very enjoyable! We had a great time at the Zilas and headed home. It was the same drill only in reverse. It certainly was not as easy as walking out to your vehicle in the driveway and going somewhere. I could not do what we did yesterday alone. It would be impossible!

I know that was a lot, but I thought you might like a glimpse of what it is like up here for us to do something that seems so simple. It was worth it though. I have only seen a sneak peak of the pictures on the Zila's blog. Can't wait to see the rest.

Thanks Jen for allowing us to come over . We had such a good time!
Posted by Susan Wyatt at 9:49 PM 7 comments:

Three month update, not quite a week late! (That's what I said earlier last week when I tried to upload pictures and my computer did not work. We are having some trouble with our desktop... sorry for the delay. I just copied and pasted into this blog what I had already typed out last time.) Things are good here in the Wyatt household. 3 months have flown by and our little ones are really changing. They are both getting chubby faces and chunky legs. We've had a break through the past 5 or 6 nights. They've been going to sleep between 8:00 and 10:00 at night and sleeping till 4:30 or 5:00 in the morning. Huge help for us to get some much needed sleep. They are also taking a long afternoon nap at the same time as Jack does and they take a decent morning nap too. They are good sleepers! Elliott really started smiling last Thursday and Lillie decided to start earlier this week. It's fun to get some reactions out of them. They also get really excited watching their mobile over their bed. Occassionally they think Jack is funny too. He loves them. Always wanting to give them a kiss, hold their hands, or give them high five. He is a good big brother. The other day Elliott rolled over from his stomach to his back. Nobody saw him do it. He was laying on his stomach on his blanket on the floor and Mary Coleman went to get a diaper and came back he was on the rug on his back.
Elliott and Lillie were being so good before we started taking pictures. By the time it was Lillies turn she was very uninterested, so we didn't get very good ones of her.
(I'm sorry for the sideway pictures. I don't know how to fix it
and today I'm just satisfied to get the pictures posted at all) 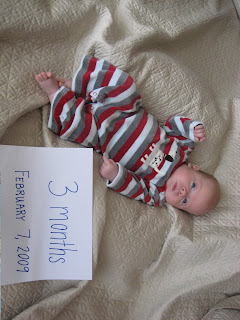 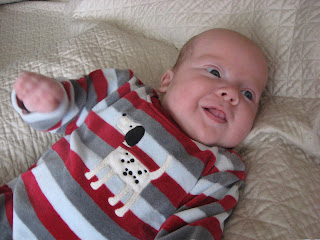 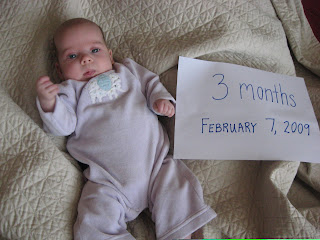 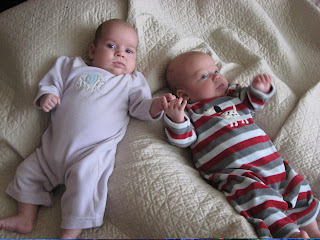 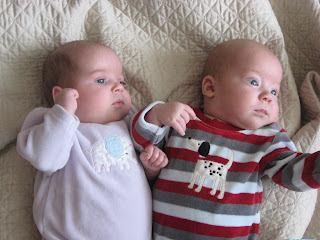 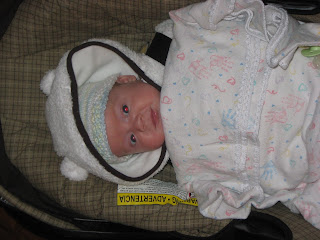 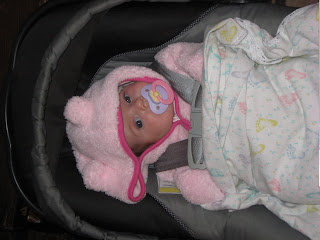 These two pictures are Lillie and Elliott bundled up getting ready to go out to eat one night. We've gone out to eat, just the 5 of us, two times now. It's been fun! 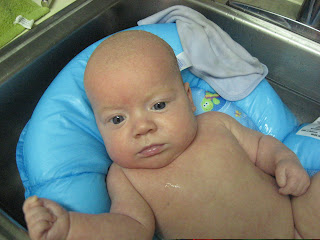 Elliott after during his bath. 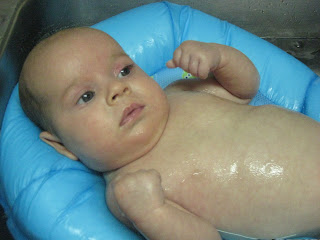 Lillie during her bath

Blog readers...check out www.loveandbeloved.com and help us start the conversation! Check it out HERE!
Posted by Freddy T. Wyatt at 8:10 PM No comments:

It's been a while. We are all good here in NYC. Last week was my first week fully alone with all 3 kids since Hannah left. It was fine. Jack, Lillie, and Elliott are really good kids, it just seems like one of them always needs attention. So my days are more constant than they are really hard. Of course the constant demand is tiring, but it's been good. Here are a few pictures from over the past few weeks. 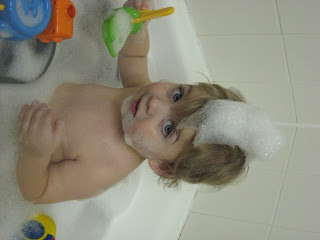 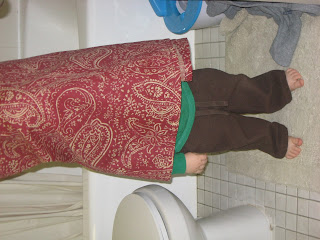 I was taking care of one of the babies one day when I heard the bathroom door shut. When I went in this is what I found. Jack was "hiding." 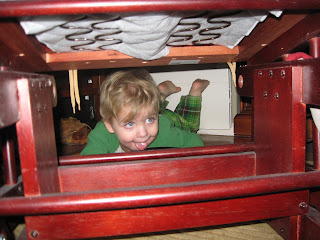 Another one of his hiding places. Behind the rocker. Here he is hiding because he got Daddy's earphones off the table and wants to play with them even though he knows he is not allowed. 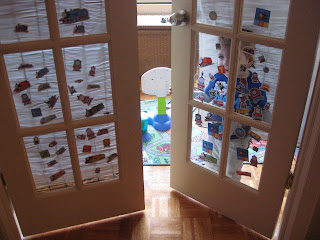 Jack loves his sticker book Trevor gave him for his birthday!
(over 700 stickers!) 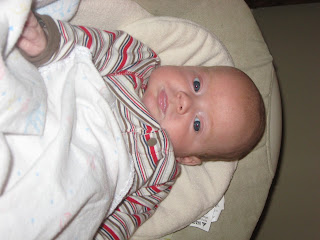 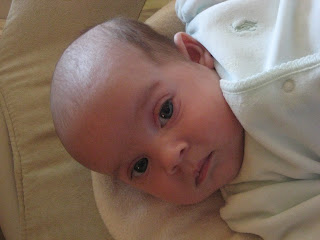 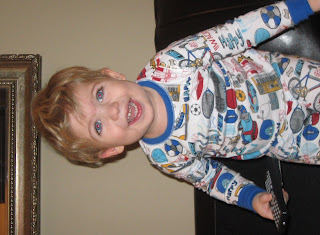 Jack before his haircut.

Yesterday we finally took Jack to get his first NYC haircut. He has needed one for months now. I think the last one was in September! Sunday he said "Mommy, haircut." That was my final motivation. It's bad when the 2 year old realizes its out of control! So we all loaded up the stroller and walked down to Kidville. Jack got to sit in the police car and drive and got to watch Thomas the Train while he got his haircut. And the other bonus... Moms get a complimentary manicure while the kids are getting trimmed up. It was a fun experience. Afterwards we met up with the Coe's and got lunch at The Shake Shack then walked over to Central Park, ate lunch and Jack and Ezra played on the playground. The weather was so nice here yesterday, sunny and comfortable outside. A much needed break from the freezing cold. Of course it's snowing outside right now! 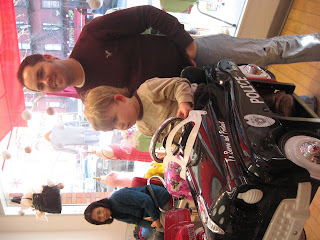 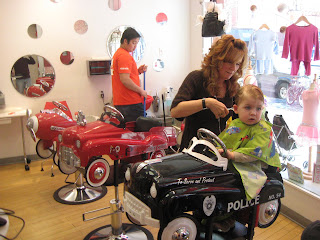 Jack chose to sit in the police car. The other two options were the fire truck or airplane. 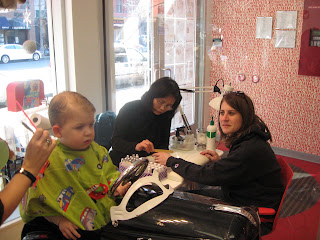 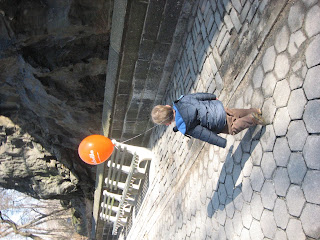 Our walk along the side of Central Park on the way to the playground. 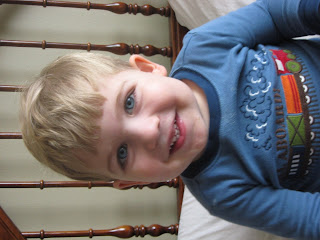 Jack this morning showing off his haircut.
Posted by Susan Wyatt at 9:18 AM 15 comments: