Yesterday was our third Sunday of having "Journey". Our Pastor Brother Roger preached a wonderful word to us out of Job. He will rotate in and preach once every 5 or 6 weeks.

Our first Sunday was amazing. No one really had any idea what to expect as far as how many folks would come to Journey. The Students began to roll in first...their Sunday school classes are the closest to the Sanctuary. For a little bit...it looked like it was going to be a mostly youth service...but people continued to roll in, lots of adults. More and more people continued to file in and even into the balconies as the energy in the place became electric. The count at the end of the morning was around 525. Some folks dismiss the importance of numbers altogether. However Luke found it important enough to record about how many received the word and were baptised (Acts 2:41). Okay so maybe we can discuss the issue of "numbers" ideas on a later post. Nevertheless, the service went great. We sensed God's presence and the people alertly absorbed God's word. May He receive all the Glory. I am currently in chapter 2 of Colossians and look forward to continuing through the book. My soul has been thrilled with the privledge of preaching through a book of the Bible verse by verse!

We have had a great time getting to connect with our families. The drive down and back in the car has proved to be great quality time of conversation and prayer together as well.

Susan has had a wonderful start with teaching school! She's only had to send one note home with a student. Ha!

Please pause and pray that God will humble me and use me in great power as I preach in Journey. Pray that the church will return to Him with all their hearts! Thanks a ton!

Our computer is still in critical care...I'm in the lab...more blogging soon...
Posted by Freddy T. Wyatt at 2:38 PM 1 comment:

My dear friends...Our laptop has a disease. It has not yet been diagonsed. Thus...to all my blogging buddies, I am so sorry for the lack of blogging. I am currently in the musty computer lab. Perhaps sooner than later...our laptop will have a resurection and we'll be up and blogging again. Till then...
grace to you all.
Posted by Freddy T. Wyatt at 4:05 PM 1 comment:

The Story You Have Been Waiting For! 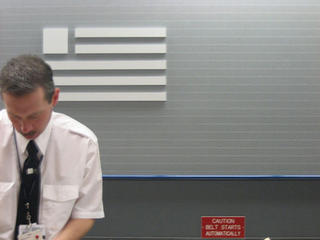 Several years ago I was visiting my old youth minister in Norfolk, Virginia. As I was preparing to fly home he asked me if I ever took a later flight for a free voucher. I had not heard of what he was talking about…but this little introduction to “how to get a free plane ticket” has proved to be very fruitful in my flying experiences. I often fly home with a $200 voucher here, a $400 voucher there, but never have I returned home with 3 free round trip tickets (anywhere in the continental US)…until this past spring. The secret is this – many airlines often overbook their flights. When this happens and everyone shows up to fly…they begin to offer vouchers to anyone who can take a later flight…so they do not have to “kick” someone off. The following story is an account of how I have continued to sacrificially help airlines who have overbooked…by taking a later flight…or something like that.

This past April I flew to NC to preach for youth a retreat at Ft. Caswell, for the North Carolina Baptist Convention. When the weekend was over I was dropped off at the airport around 1:30 pm. My flight was not supposed to leave Willmington until 4:50ish, followed by a good layover in Charlotte and then into Louisville at about 11:15 pm. This particular weekend I was traveling alone without Susan so I was excited to get back home to her. Nevertheless, I still asked the folks at the check in counter (before I went through security and to the gate) if my flight was by chance overbooked. I did not really want to get in later than 11:15 but the curiosity got to me. My flight was indeed overbooked. I asked if there was another flight to Louisville. The lady behind the counter spent a minute typing in her computer. She then told me that they could give me ground transportation to Raleigh (buy me a cab ride) which was a 2 hour drive and then fly me from Raleigh through Pittsburg into Louisville with an arrival time at 9:30 – an hour and a half earlier than usual. They would do all this as well as give me a free voucher to fly anywhere in the continental US. That’s right…get home earlier to Susan with a free ticket! However typical policy is that they cannot offer you a voucher until about 45 minutes to an hour before the flight. I kindly talked to the lady at the counter and told her… “hey I’m here, and willing to take it…you know you are going to need me to, so lets just do it.” I watched her go and speak to her supervisor about it and….Yes! They said, “Okay, we’ll do it.” So five minutes later I walked out the door and hopped in a cab on my way to Raleigh. I got decent reading done in the cab, although my cab driver was a character to say the least. Once I arrived in Raleigh I went on through security to the gate…of coarse I asked them if they were overbooked too! They were not, so I settled in and got something to eat…excited that I would be getting home earlier that I anticipated with a free ticket.

About 40 minutes before my flight was to leave, the worker at my gate came over the intercom offering 2 free round trip tickets to anyone who could take a later flight. " They weren’t over booked,” I thought as I darted up to the counter. The plane was too heavy, not overbooked. So I asked… “Can you get me to Louisville tonight?” After about 30 seconds typing away on her computer, she says, “We can fly you out of here (Raleigh) into Charlotte (my original connecting/layover location) and into Louisville at 11:15. That’s right. On the exact same connection flight of my original flight! Because of my dreadful inconvenience they awarded me 2 free round trip tickets…that is, in addition to my first. You got…2 + 1 = 3! Three free roundtrip tickets anywhere in the continental US and arriving back in Louisville on the same flight that I was going to from the beginning! So all I was out, was a 2 hour cab ride to Raleigh that I didn't pay for and I came home on time with 3 free tickets. Gotta love it!

Tips for receiving one of these free flights yourself. 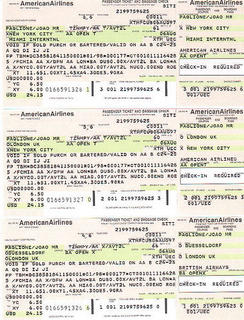 1) Try to schedule your flight on Sunday evening/afternoons. This is the time most overbooking occurs.
2) Arrive early and ask the person at your gate if your flight is overbooked. Kindly let them know that you would be willing to take a later flight and give them your name.
3) Try to have a flexible schedule so that you do not “have” to be somewhere at a certain time and thus can afford the delay.
4) Delta offers plane vouchers in money amounts(not cash but $200 toward your next flight); US Air offers free roundtrip tickets. You cannot use the vouchers with things like Expedia, Cheaptickets, or Orbitz. You have to get them from the company so US Air is the best way to go!
5) Travel with an ipod or a good book and enjoy!
Posted by Freddy T. Wyatt at 5:39 PM 4 comments:

Have You Read or Heard about this?

I read this morning an amazing story you have to check out. Brain Dead Woman's Baby Doing Well
Posted by Freddy T. Wyatt at 3:03 PM 1 comment:

Despite getting home at 1:30 am Saturday morning, I woke up and could not go back to sleep at 7:30 am...so I got up. I love getting up early, especially on Saturday mornings...I'm just not always good at it...maybe you can relate. I had a wonderful time with the Lord and then found myself...where else, the blogosphere. It was a great place to be. My heart was warmed and encouraged by a post titled "An Amazing Thing" that Brett Vaden left on his blog. You should check it out. Be sure to scroll down past his excellent movie review to find it. To read it click here!
Posted by Freddy T. Wyatt at 5:09 PM 1 comment:

You see I began to realise that I have a much larger reading audience that the comments on my blog would indicate. A few friends here, a family member there and few more here...etc. The thing is none of these folks had left any comments (which is quite alright.) For the blogger (that's me) one has to decide is the time I put into blogging worth it. Unless someone has a "hit counter" which records how many hits your site gets, then the only way a person can gage what kind of reading audience he or she has is by the amount of comments left...or so I thought. But to my pleasant surprize, two good friends of mine told me last weekend that they had bookmarked my blog...one actually dogged me a little for not blogging during vacation...he was dogging me that week for not posting anything because he didn't know I was on vacation...(yes you two know who you are)...anyways, I was pleasantly surprised to find out that I had many more folks reading my blog than I realised. This is exciting and will most definitely result in more blogging...so stay tuned and spread the word about the "Laughing and Learning Blog".
Posted by Freddy T. Wyatt at 11:36 AM 8 comments: